My favourite YouTube channel just got even better. New series. 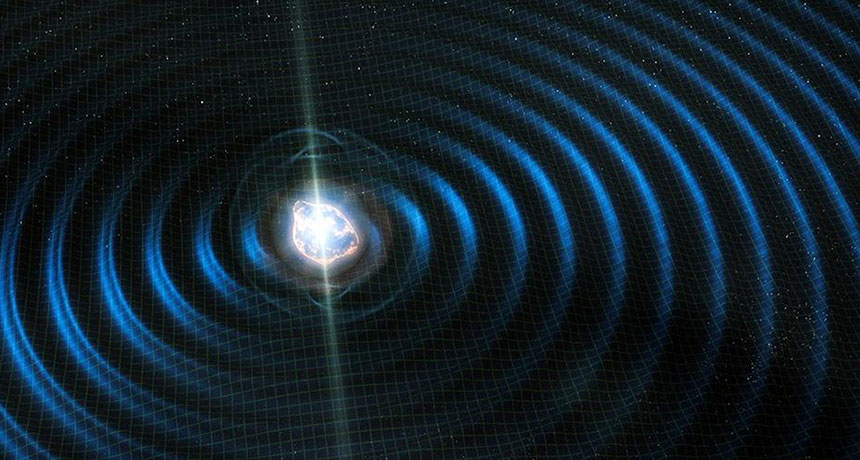 When it comes to the dimensions of spacetime, what you see may be what you get.

Using observations from the collision of two neutron stars that made headlines in 2017 (SN: 11/11/17, p. 6), scientists found no evidence of gravity leaking into hidden dimensions. The number of observed large spatial dimensions — kilometer-scale or bigger — is still limited to the three we know and love, the researchers report January 24 at arXiv.org.

Just as insects floating on a pond may be unaware of what’s above or below the water’s surface, our 3-D world might be part of a higher-dimensional universe that we can’t directly observe. However, says astrophysicist David Spergel of Princeton University, a coauthor of the new study, “gravity might be able to explore those other dimensions.”

Such extra dimensions might explain some conundrums in physics, such as the existence of dark matter (an as-yet-unidentified source of mass in the universe) and dark energy (which causes the universe’s expansion rate to accelerate), says coauthor Daniel Holz, an astrophysicist at the University of Chicago. “That’s why people get excited about these modifications.”

To look for any hint of leaking gravity, scientists turned to the light and gravitational waves emitted in the neutron star smashup detected on August 17, 2017

The Nobel Physics Prize honors big discoveries involving materials often too small to be seen by the naked eye.

Less than half a second after the first direct evidence of gravitational waves was recorded on 14 September 2015, a very short, faint signal was registered by NASA’s Fermi Telescope from the same region in space.

High-energy light particles called gamma rays were caught emanating from a black hole merger in the area, and the discovery will not only help physicists pinpoint the exact source of the gravitational wave – if confirmed, it has huge implications for our understanding of the fundamental physics that govern our Universe.

“Gamma-rays arising from a black hole merger would be a landmark finding because black holes are expected to merge ‘cleanly’, without producing any sort of light,” NASA explains.

First off, here’s what we know. On September 14, the Laser Interferometer Gravitational-Wave Observatory (LIGO) facilities in Washington and Louisiana picked up the first direct evidence of Einstein’s gravitational waves, traced to the merging of two black holes (called binary black holes) around 1.3 billion years ago.

The discovery was significant for two reasons, as Fiona MacDonald reported for us earlier this year:

“This event – which in itself is a big deal, seeing as no one had ever spotted a binary black hole merger before – was so massive that it significantly warped the fabric of space time, creating ripples that spread out across the Universe… finally reaching us last year.”

Now, researchers at NASA have just announced that they too picked up on something strange on September 14 – a very faint burst of gamma rays that occurred less than half a second after the gravitational waves, and in the same region of space.

Coincidence? We can’t discount it just yet, but NASA says there’s a 0.2 percent chance of these two events randomly occurring in the same place at the same time.

At the very least, the discovery – which was picked up by the Gamma-ray Burst Monitor (GBM) on NASA’s Fermi Gamma-ray Space Telescope – will help scientists figure out exactly where this black hole merger occurred 1.3 billion years ago.

“Currently, gravitational wave observatories possess relatively blurry vision. For the September event, dubbed GW150914 after the date, LIGO scientists could only trace the source to an arc of sky spanning an area of about 600 square degrees, comparable to the angular area on Earth occupied by the United States.

Assuming the GBM burst is connected to this event, the GBM localisation and Fermi’s view of Earth combine to reduce the LIGO search area by about two-thirds, to 200 square degrees.”

Map of the original source of the September 14 gravitational wave event, which has now been narrowed down by two-thirds. Credit: LIGO/Axel Mellinger

But the fact that light appears to have been emitted from a black hole merger could also prompt a massive rethink of one of the most violent, high-energy events in the known Universe.

Why? Well, simply put, gas is needed in order to generate light, and there should be no gas around two soon-to-merge black holes, because it should have been swallowed up by one of them long before the pair collide.

There are now two possibilities. The first is the gamma ray burst really was a coincidence and wasn’t related to the GW150914 black hole merger that produced the September 14 gravitational waves. The second is that black hole mergers really can produce an observable gamma-ray emission, and that means we’re going to have to rethink the laws that govern what black holes can swallow and when.

“This is a tantalising discovery with a low chance of being a false alarm, but before we can start rewriting the textbooks we’ll need to see more bursts associated with gravitational waves from black hole mergers,” one of the the GBM team, Valerie Connaughton, told Francis Reddy at Phys.org.

We’re now going to need more data to figure out which, but gas particles escaping the pull of black holes? That would be pretty damn amazing.

The results have been published in The Astrophysical Journal.