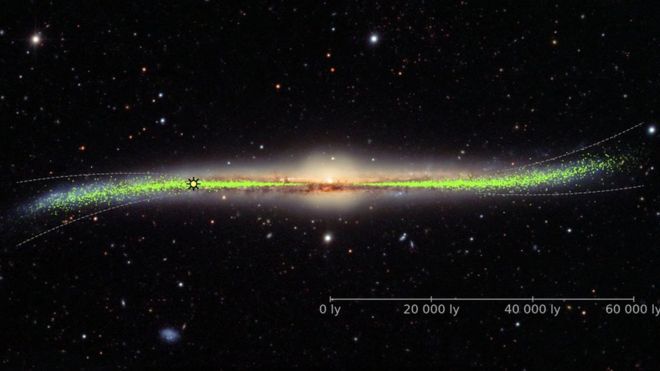 Our galaxy, the Milky Way, is “warped and twisted” and not flat as previously thought, new research shows.

Analysis of the brightest stars in the galaxy shows that they do not lie on a flat plane as shown in academic texts and popular science books.

Astronomers from Warsaw University speculate that it might have been bent out of shape by past interactions with nearby galaxies.

The new three dimensional map has been published in the journal Science.

The popular picture of the Milky Way as a flat disc is based on the observation of 2.5 million stars out of a possible 2.5 billion. The artists’ impressions are therefore rough approximations of the truer shape of our galaxy, according to Dr Dorota Skowron of Warsaw University.

“The internal structure and history of the Milky Way is still far from being understood, in part because it is extremely difficult to measure distances to stars at the outer regions of our galaxy,” she said.